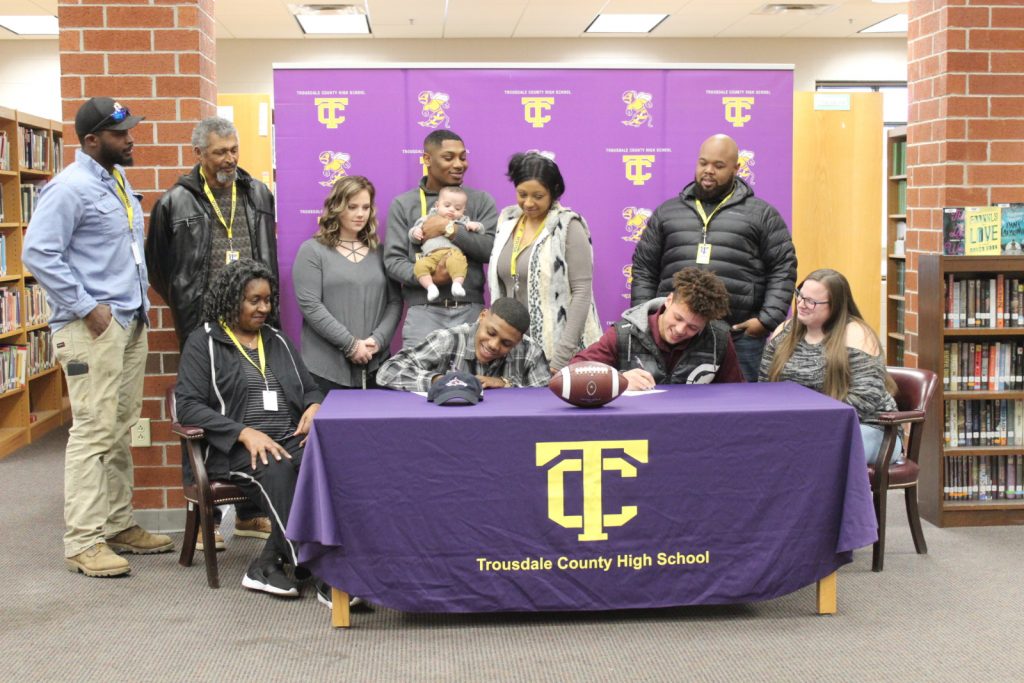 The Trousdale County Yellow Jacket Football program had a big day on National Signing Day (February 5th, 2020) when it had two seniors sign to play college football. Tarvaris Claiborne and Kobe Ford both signed with Cumberland University located in Lebanon, TN. Cumberland University is part of the National Association of Intercollegiate Athletics (NAIA) and competes in Mid-South Conference. The Cumberland Football program dates back to 1894.

Tarvaris Claiborne and Kobe Ford were both named to the Tennessee High School Football Coaches Association (TnFCA) Class 2A All-State Team for their performances during this past 2019 football season. Tarvaris Claiborne was named back-to-back Defensive Player of the Region in 2018 and 2019. He was also a back-to-back TnFCA Class 2A All-State linebacker. Kobe Ford was named Offensive Player of the Region in 2019 as well. Coach Blake Satterfield stated, “Cumberland University signed two great ones today. Any coach, at any university, at any level would love to have these two young men playing for them at the collegiate level. I wish both Kobe and Tarvaris the best of luck at the next level and I look forward to seeing them be a big part of the Cumberland University football program as soon as they step on campus.”

These are the first players to sign for Coach Satterfield since taking over as head coach on February 11th, 2019. Coach Satterfield continued by saying, “it is my goal to provide these players with the opportunity to play college football after their time at Trousdale County High School. I hope this is the first of many who come through this program and choose to play at the collegiate level.” Cumberland University signed a total of 30 players on National Signing Day and their spring football game is set for April 4th, 2020.

Playoffs Round 2
6:30 pm
View All Events